November 28, 2016.  We escaped just before Thanksgiving to the Rio Grande Valley, to look for green jays – a bird that doesn’t come much further north than that southern tip of Texas. We’d never seen one!  Binoculars and cameras in tow, off we went.  We stayed at Rancho Lomitas (http://www.rancholomitas.com/) – a native plant nursery with RV spots tucked here and there.  Thanks to a long-term RV resident who feeds the birds, green jays were ever-present if not exactly sitting still for portraits.

On a tour of the nursery, I learned a new word – ramadara – that immediately began tickling the poetic lobes of my brain.   This image is a collage of three separate jay photos which gives a sense of the thorn scrub they inhabit and their gregarious nature. 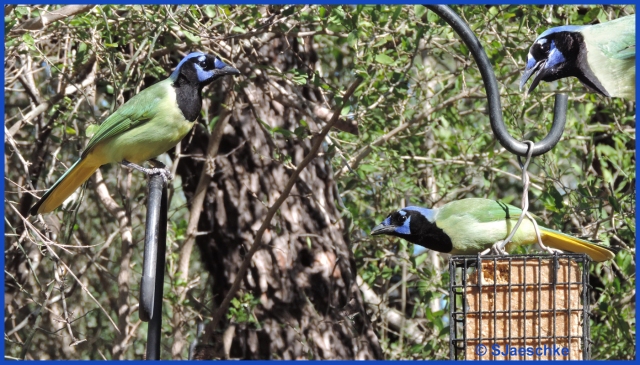