April 30, 2018.   April brings beautiful wildflowers to Central Texas.  My favorite is the pink evening primrose, Oenothera.  My first April here (1987) the median strip between walk and street proved to be primrose territory.  A bonus the realtor never mentioned.  Thereafter, I was careful not to mow until after the blooming!  Until … in 2011 a new neighbor on the block (from out of state) created a stink about my “weeds” and sent a cop out to read me the rules.  I had multiple cats and zero doubts that no rats lived in my median strip.  But: rules are rules and fury is fury.  I made sure I’d never be asked to mow that strip again – paved it with sandstone slabs and spite.

Now, every April, I wish I hadn’t.  This year, I offer a poem to honor the missing pink  and a collage to convey imagined petals – petals much larger in proportion to walkway than any Texan’s bragging might suggest; but hey, my imagination knows no limits! 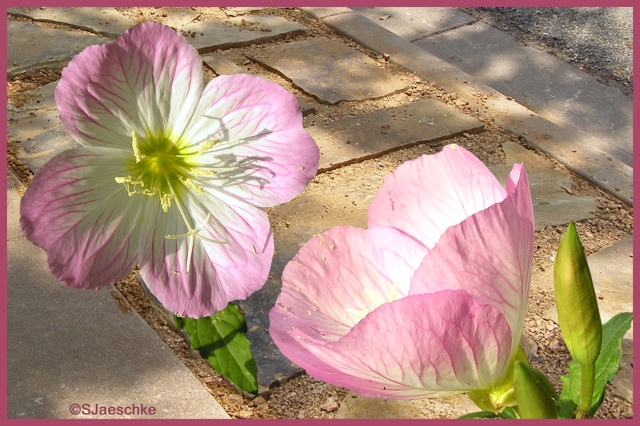