April 29, 2020.  Yesterday (another day isolating at home) included a nap, and an awakening that stirred up a poem.   This is NOT a black&white image of my blue bedroom – somehow afternoon sunlight shifted perspectives right out of color ranges –  for my eyes, and for the phone camera synchronistically beside me (I don’t usually nap with  phone!).  I’ve added an icon to depict inner spin with Uncertainty.

April 16, 2020.  I saw the alert of an unusual alignment of the moon with respect to Mars, Saturn, and Jupiter.  Wee hours of the morning, as moon is waning thus rising later, later each night. Clouds precluded photos the first two tries, but this morning at 3:00am the skies were clear.  Whoopee!  Then ooops … come back in an hour after the moon is above the trees.  Still, I took one cluttered shot.  (I did go back an hour later for uncluttered pics.  None nearly as interesting, though.) 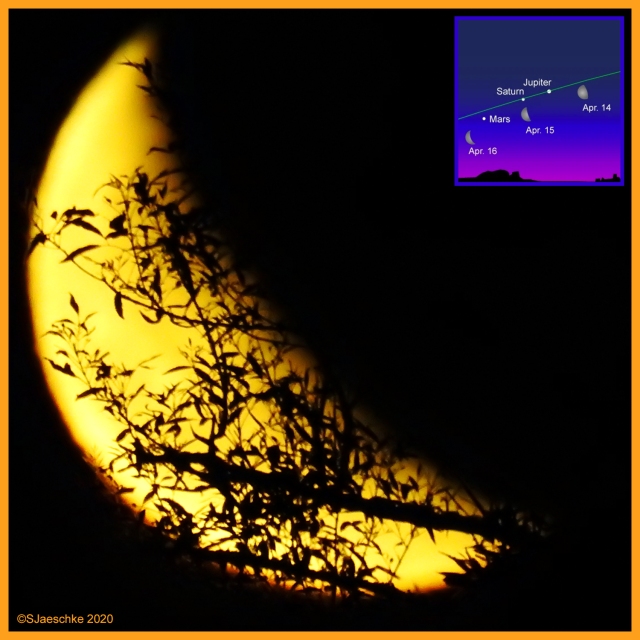 April 11, 2020.  I’ve been sewing … first time in awhile!  Making face masks to wear into grocery stores and such per COVID-19 expectations.  In years past I did a lot of sewing, but not recently.  Feels good to be back in the saddle, so to speak.